Rachel Cooper has been at the Asia Society since 1993 where she is the Director of Cultural Programs and Performing Arts. She has extensive experience in the presentation of traditional and contemporary Asian and Asian-American arts and culture. She oversees the development and presentation of Asia Society programs in music, dance, theater, film, literature. These programs include performances, film screenings, lectures, panels and symposia. She works closely with the Asia Society Museum to create programs in conjunction with all exhibitions. Her work has included commissioning and presenting new works from Asian and Asian American artists. Recent programs have included The Rumi Project including Iranian musician Shahram Nazeri, poet Coleman Barks, among others, and Bhutan: Dragons, Kings and Politicians a symposium and performance.

Ms. Cooper has produced and presented traditional and contemporary performing artists including Eiko and Koma, Chen Shi Zheng, Vijay Iyer, and Yin Mei. Most recently commissioning and producing Kinsmen/Svajanam with Rudresh Mahanthappa and Kadri Gopalnath; In What Language, a theatrical work for music and spoken word by composer Vijay Iyer and poet Mike Ladd; The Floating Box: A Story of Chinatown a chamber opera by Jason Hwang; 18 Songs of a Nomad Flute: The Story of Wenji a bi-lingual opera by Bun-Ching Lam; Forgiveness, a music theater work conceived and directed by Chen Shi-Zheng and Noh master Akira Matsui. She has collaborated on several touring projects including a twelve-city tour Dance:the Spirit of Cambodia, with a company of 41 artists from Cambodia and an eight-city tour by Ratan Thiyam’s Chorus Repertory Theatre from Manipur, India.

Ms. Cooper was previously the Associate Director of the UCLA Center for Intercultural Performance, where she directed the Festival of Indonesia In Performance program that brought twelve traditional and contemporary performing arts groups from Indonesia to tour and perform in the United States. Ms. Cooper is the co-founder, former director, of the San Francisco-based Balinese music and dance company, Gamelan Sekar Jaya. In 2006 Ms. Cooper received the William Dawson Award for Programming Excellence from the Association of Arts Presenters. 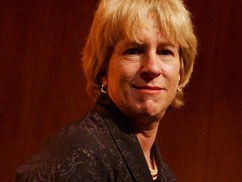 In this exclusive interview, Asia Society's Director of Cultural Programs and Performing Arts Ms. Rachel Cooper describes the significance of Muslim Voices: Arts & Ideas. "It's about artists discovering each other," she says. "And listening to each other."